Twelve veterans of Bomber Command were among more than 160 people who attended the fifth annual Bomber Command Commemorative Day service at the Shrine of Remembrance in Melbourne on Sunday afternoon, 5 June 2016.

It was a wet day up and down the east coast of Australia (which forced the ‘headline’ event in Canberra into the shelter of the cloisters of the Australian War Memorial instead of in its traditional location out on the lawn), and one could be forgiven for thinking that this might have kept numbers down in Melbourne.

One would be wrong.

The crowd was officially welcomed to the venue by Shrine Governor Major Maggie More RFD. Bomber Command Commemorative Association Victoria Chairman, Paul Dipnall, then explained the significance of the occasion, emphasising the unique qualities of life in Bomber Command: the youth of aircrew, the stringent selection process and the knowledge that, over a tour of 30 operations, death was a more likely outcome than survival. “Today we all honour the courage of these great men and the memory of 3,486 Australian airmen who sacrificed their life for our peace,” he said.  “The relative peace we enjoy today is their legacy to us.” Download a copy of Paul’s complete speech here.

The Royal Australian Air Force’s Air Commodore Geoffrey Harland, Commander of the Air Force Training Group, was the guest speaker. In an excellent address (available for download here), Air Commodore Harland highlighted some of the statistics of life in Bomber Command: 125,000 aircrew served, of which 55,573 were killed: Britons, Canadians, Australians, New Zealanders and others from Poland, Free France, the USA, Norway and India. 1,479 ground crew lost their lives during the war, along with 91 members of the Womens Auxiliary Air Force on duty with Bomber Command. Almost 11,000 bomber aircrew became prisoners of war.

“It is crucial that we remember the sacrifice these numbers represent,” Air Commodore Harland said. “As a modern aviator I marvel at the bravery of these young men… the example they set for us in terms of commitment, valour and sacrifice is instructive to us all and, I would argue, sets an unmoveable foundation for the values we hold so dear in our modern Air Force.”

“To forget is not an option.”

For the formal commemorative part of the ceremony, Carey Baptist Grammar Middle School Co-Captain Sophie Westcott read the Ode. It was the first time that a student from Bomber Command Commemorative Association Victoria’s Partner School has carried out an official role at this service and it was well-received.

The weather had closed in by the end of the ceremony so that the top half of nearby Eureka Tower (975’) was disappearing into low cloud. This made conditions too dangerous for the planned flypast. The Royal Victorian Aero Club contingent were consequently grounded at Moorabbin, and though the Mustang actually got airborne at Tyabb, it was unable to safely navigate around the cloud and the pilot made a prudent decision to return to base. This disappointed the crowd and two television news camera crews who had set up on the Shrine forecourt in anticipation, but the poor weather ensured that many stayed in the foyer outside the auditorium after the service to enjoy conversation with light refreshments.

A few weeks before the ceremony, BCCAV was contacted by a reporter from the Mornington News who had heard about this ceremony but was looking for a local angle. We facilitated contact with Jean Smith, a 94-year-old veteran of the Womens Auxiliary Air Force who lives on the Peninsula, and were pleased to read the resulting coverage in the News (link here).

Jean said on Sunday that she had told the reporter she was so keen to attend the ceremony that she was saving her pennies to pay for a taxi to the city, a journey of an hour and a half each way. “It was a throwaway line really,” she said – but the reporter printed it. Within days, three members of the public had separately contacted the newspaper offering to drive Jean to Melbourne for the ceremony.

And so on Sunday morning, Jean arrived at the Shrine of Remembrance, driven by a friendly member of the general public. It was the embodiment of Air Commodore Harland’s words:

We must take pause to remember the collective sacrifice of this group, we must remember those who perished and cherish those who survived and those who are still with us and say ‘thank you’ and know that that will never be enough. 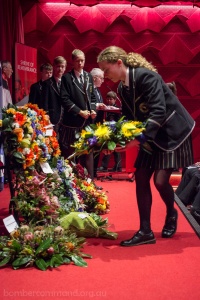